Sophomore Owen Lobsinger has voted on to make Class B Division 2 Honorable Mention AP All-State Team.  The Player of the Year in Divison 2 Class B was Romeo Weems.  Weems attended New Haven high school and he also won Mr. Basketball.  The 6’7 forward Weems will play collegiate Basketball at Depaul next season.  Rounding out the first team is

Lobsinger is the third Charger to make the All-State team in the past two years.  Last season G Cameryn Carpenter made second team and Makai Conner made Honorable Mention.  There is a panel of 10 sportswriters who make up the votes for the awards.  Congratulations again Owen. 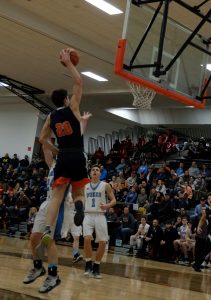